Is Your Workplace Too Nice? This is How to Find Out | Fierce

Is Your Workplace Too Nice? This is How to Find Out 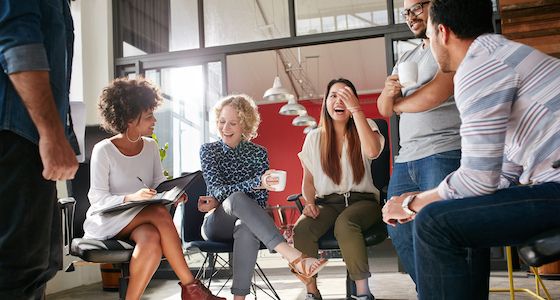 Whether you’re from the American Midwest, or you know someone from the region, you’ve most likely at some point or another had a conversation about the idea of, “Midwest Nice.”

My parents met at Cleveland State University. My mom grew up smack dab in the middle of Cleveland, while my dad grew up in the burbs one-hour east. In short, most of my gene pool lives in Ohio. And because I have never lived in Ohio, I’m a rare species in the Mason/Engle clan.

This is because I get to look from the outside in, and I’ve developed a keen sense of sniffing out “Midwest Nice” pretty quickly.

The important thing to note here is that Midwest Nice isn’t the only form of “nice” that shows up throughout the world (and in the workplace) — and they’ve got their own tell-tale signs too.

Our organization, Fierce Conversations, has this special ability to sniff out cultures of nice as well, as these cultures tend to sneak their way into problems our clients come to us to resolve and they don’t even realize it.

As I wrote in the piece, The Dark Side of Niceness: How Honesty is Taking a Backseat in the Workplace, the results of our recent research on the impact niceness has on the workplace confirmed how we would define cultures that are overly nice.

Nearly 63 percent of employees chose not to share a concern or negative feedback at work because they were fearful of being seen as combative and then kept their concerns and feedback to themselves.

Respondents said it’s important to be considered nice because:

We all want the above things: enjoyable, easier, and more interesting work – sign me up, please!

Here’s what often gets overlooked: The three reasons above can happen while still sharing concerns and feedback with colleagues – in a productive and relationship-enriching way.

What’s So Bad About Being “Nice”?

You should not keep those to yourself. So, why is it so bad to keep concerns and comments to yourself?

It is not healthy. When you keep negative thoughts or secrets to yourself, there is scientific evidence that stress hormones, such as cortisol, increase, and your health is affected.

“Sleep may be disturbed, which could lead to emotional mood swings and a propensity to be ill-tempered or lose your cool,” Allen Towfigh, MD, a neurologist and sleep medicine specialist at New York-Presbyterian Hospital/Cornell Medical Center, recently told Forbes.

“You may also have difficulty with memory and learning. And the excess release of cortisol will cause a host of other ailments, including possible increase or loss of appetite and disruption of metabolism,” he said.

”It creates a dump truck effect. During a Fierce training about Confront we recount a personal story about a woman, Sara, who shares that her boss bothers her over and over and over again.

Then, one Wednesday afternoon, her boss does one small thing, and Sara unloads the entire dump truck of her frustrations. Months of examples and all the emotions that go along with them.

I shouldn’t have to say this: That’s not effective.

It is not authentic. We can all sniff fake from a mile away. When someone is not disclosing something to you, you sense it. Misalignment with personal values is often cited as a big reason for career change and shifts.

If you are a leader, you want your organization, team, and employees to be healthy, to address issues as they come, and to be authentic and dedicated. Ultimately, these results in top and bottom line health, productivity, and happiness.

Signs of a “Culture of Nice”

So, how do you know when you are part of a “Culture of Nice”?

The top signs we’ve seen from Fierce clients are:

Another major way leaders can determine if their organization is fostering a “Culture of Nice” is by understanding the ways this niceness culture shows up.

Below, you can find the most common cultures of nice and what they tend to look like at organizations:

Three Types of “Cultures of Nice

1. Only Smiles Can Live Here.

A culture where there is legislated optimism. The expectation is that each employee keeps the atmosphere positive, and therefore, employees associate bringing up concerns or addressing issues head-on as negative and going against the status quo.Ways to tell:

2. Respect with a Capital R AKA “Don’t Question Me.”

A culture where employees associate respect with agreeing with each other on the surface. This culture of nice does not encourage sharing concerns with individuals who may potentially have shortsighted or disconnected ideas or strategies because it is considered disrespectful to do so. Ways to tell:

3. Passive-Aggressive Party of Many

A culture where an undercurrent exists. Everything seems positive on the surface, however, there are tensions that show through. On the outside, the culture seems to be positive, however, when you dig deeper, you realize the “audio” doesn’t match the “video.”Ways to tell:

Now, I want to take a second to highlight that I’m not saying niceness is a bad thing in the workplace because it absolutely is not.

In order to combat “nice” cultures, it takes time. This does not change overnight. However, once you start paying attention to the signs, you know where the work needs to take place.

I want to hear from you. Do you believe you are part of a “Culture of Nice”? Let us know by clicking on the chat icon to the right. I’m looking forward to hearing your story.